One of my favorite things about the Sierra Foothills AVA in California is its quaintness.  It reminds me of what Napa must have been like fifty years ago.  Overall this area is rustic and a bit unpolished, but many of the wines taste like wines from the Sierra Foothills should.  It’s as if the grapes have an awareness of their home.  The terroir is special and evident in many of the wines.  Some of the wines made in this unique area are somewhat generic, but others are gems! 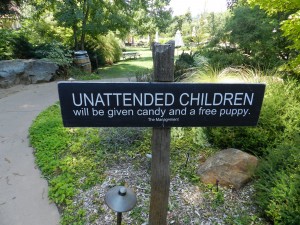 Boeger Winery – Our first tasting on Day Two was at one of the oldest wineries of the region, Boeger.  Gold was discovered only 15 minutes from here, and a flood of wine-loving people followed.  The Fossati-Lombardo family started a winery on this property in the 1850s, and their original house, cellar and distillery are still being used today. 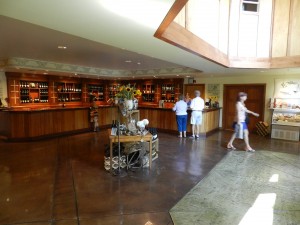 Greg and Sue Boeger purchased the property in 1972 and opened their doors in ’74.  While preserving the history of the buildings via restoration, using many of them still today, they have also since built a new state of the art winery with a large, lovely tasting room and gift shop.  I especially enjoyed their Zinfandel and Barbera wines.  I got a kick out of their picnic area sign too!

Crystal Basin Cellars – Jack, one of the owners of Crystal Basin, was behind the tasting bar pouring for us.  Jack seems to be very proud of the fact that, according to him, all of their wines are over 15% alcohol.  For me it simply meant a lot of hot wines that pretty much all tasted the same.   The gal working with Jack (who told us about 10 times that she “works for wine”) was very excited to see that he was opening a bottle of their 2009 El Dorado Grand Reserve Triumphant.  A Right Bank Bordeaux blend of Cabernet Franc, Merlot, Cabernet Sauvignon, Malbec and Petit Verdot, Jack was very proud as he boasted that this wine tasted just like an Opus One, but for half the price!  What?????  I have a feeling that Jack’s never tasted an Opus, as there were no similarities between the Napa Bordeaux blend parented by Robert Mondavi and Baron Philippe de Rothschild (of Château Mouton Rothschild) and the hot, huge, fruit gunk that he poured into our glasses.  This wine tasted pretty much just like all of the other reds he had poured for us. 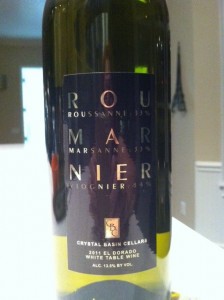 Another interesting moment was when the gal “who works for wine” jumped about 10 feet into the air and made a loud shrieking noise when my husband and I spit our first  taste into the dump bucket.  We were alarmed and asked her if she was okay.  She stated that she couldn’t bear watching people spit out wine.  At first I thought that she meant that she was repulsed to see anyone spit their “fine” wines out and not consume them.  I then realized that it was the act itself of spitting into the spit bucket that caused her so much pain.  My thoughts?  She should probably find another way of “working for wine” than in a tasting room, where generally speaking a lot of spitting occurs!

I always buy when I taste, and this was one of those places where I found it difficult to find a wine I liked well enough to buy even one bottle.  I ended up purchasing their RouMarNier, which is a blend of 33% Roussanne, 33% Marsanne and 34%Viognier.  It’s kind of a clever name, and the best wine of the bunch.  Interestingly, and much to Jack’s surprise I would think, it comes in at 13.5% alcohol.  Thank God!

Sierra Vista Winery – This winery is set on a little piece of paradise.  Appropriately named, Sierra Vista is set high in the foothills with gorgeous views of the Crystal Range of the Sierra Nevada Mountains.  Vines and lovely fig trees surround the tasting room.  The day we were visiting, 81-year-old John MacCready, owner and winemaker, was perched high on a ladder tending to his fig trees.  Inside we met Gail, the tasting room employee, and a somewhat cranky older woman who I assume was Mrs. MacCready.  Luckily she pretty much ignored us and we were left in the very ample care of Gail.

There are some very interesting things about Sierra Vista Winery.  Firstly, many of the vines in their vineyards are growing on their own rootstock.  I was VERY impressed with this information.  Most Vitis vinifera grape vines around the world have been grafted onto American rootstock since the 19th century, when an outbreak of phylloxera destroyed vineyards around the world.  It was determined that American rootstocks are immune to phylloxera.  After conducting tastings of wines made with grapes from their original rootstock compared with grapes grafted onto American rootstock, MacCready decided that the former made better wines.  To reduce the risk of phylloxera contamination in his vineyards, MacCready only allows his own equipment in his vineyards and does not allow tours, which can bring risk of infestation.

Secondly, he was the first person in the Sierra Foothills to plant Rhone varietals, which are now, along with Zinfandel, considered to be the main varietals of this region.

His wines are very good.  I especially enjoyed the 2012 El Dorado 60% Viognier-40% Roussanne, the 2008 Reeves Vineyard Zinfandel, and the 2011 Lynelle Reserve, a Châteauneuf du Pape blend. 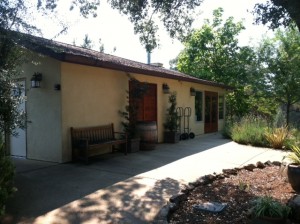 Holly’s Hill – I was looking forward to this tasting.  Holly’s Hill Winery focuses exclusively on Rhone varietals, and I’m a lover of all wines Rhone. Connie in the tasting room was awesome!  They have a large selection of wines to sample, and she did a great job of helping us pick and choose.  We were spitting, so we tried a lot of them!  We ended up buying a few, including the 2009 Wylie Fenaughty Reserve Syrah.  Although Holly’s Hill grows most of its own grapes, the Wylie Fenaughty grapes are bought from two different growers.  The Wylie vineyard is a steeply terraced vineyard (about 2,500 feet elevation) in the Sierra foothills in an area called Georgetown. The Fenaughty vineyard is at about 2,700 feet, but in the Apple Hill district. Both are planted to the same clone of Syrah, but the soils are different, therefore producing different styles of wine.  Together, they produce a lovely wine that has great fruit, a nice earthiness and is reminiscent of some wines from France.  That’s probably why I enjoyed it so much!

My only regret at Holly’s Hill is that I didn’t snap a picture of their wine dog Drake!  He was a very loveable Golden Retriever who helped relieve the longing I had for my puppies at home! 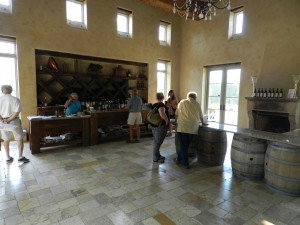 Miraflores Winery– This state of the art winery is a lovely Mediterranean style building set amongst the rolling foothills of the Sierra Mountains.  In charge of pouring our wines was Cheri, a delightful woman who was fun, but also full of info.  And the wines were great.  This was probably my favorite tasting of the trip.  It’s difficult to know where to start with the wines, so I’ll tell you a few of my favorites. 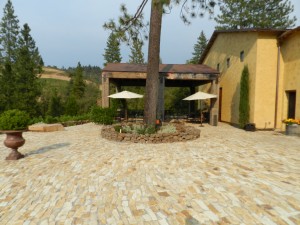 The 2009 Estate Zinfandel is a lovely food friendly wine.  It’s not too big and jammy, but well balanced and would be perfect will many types of food.  Personally, I’m thinking pizza!  This wine received glowing scores from some well-known and reputable publications.

The 2010 Méthode Ancienne Syrah is also a great wine. Méthode Ancienne refers to the process of foot stomping the grapes!  One of many examples of Miraflores’ winemaker Marco Capelli doing a splendid job here, this wine is reminiscent of a Northern Rhone.  It’s a delicate and very flavorful Syrah that comes in at 13.5% alcohol.  This was my favorite of the tasting, so I had to buy a couple of bottles. 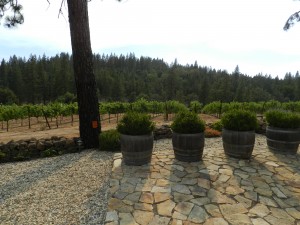 Miraflores also does a beautiful job with some sweet wines.  The 2010 Borticelli and the non-vintage Black Muscat were lovely.  My husband’s favorite was the non-vintage Angelica, which is made from the Mission grape. On the palate are caramel and vanilla.   We bought a bottle of this as well.

Day two was full of much adventure!   We were lucky enough to taste some fabulous examples of truly great Sierra Foothills wines, along with some that were more educational than enjoyable.  And that’s okay!  That’s why I love to travel to winemaking regions.  I want to taste them all!!!!

Of all of the California wine regions I’ve visited, there was one AVA in that great state yet for me to explore.  I crossed that…

2007 Sprecher Barley Wine (A Beer For Your Wine Cellar!)

I’m obviously a huge wine lover, but I’m a beer lover too! I’ve been all over the world tasting wine, but I also drink a…