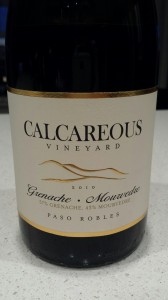 If you read my blog on a regular basis you’ll know that I’m a sucker for the Rhone varietals.  The Rhone Valley in France is my wine heaven, but Paso Robles is an area that is doing fabulous things with Syrah, Grenache, Mourvedre and the rest of the Rhone grapes.

Lloyd Messer and his daughter Dana Brown, both experienced wine distributors in Iowa, founded Calcareous Vineyard in 2000.  They shared the dream of owning and operating a winery of their own and after researching many renowned wine regions around the world decided that California’s Central Coast was where they wanted their dream to come true.  They named their winery “Calcareous” after the Latin word describing the white colored lime deposit soil.  Their goal and motto has been to “Let the Soil Speak”, and you can taste it in their wines.

Sadly Lloyd Messer passed in 2006, so today Dana and her sister Ericka are keeping the dream alive!

I opened the 2010 Calcareous Vineyard Grenache-Mourvedre tonight, which is 57% Grenache and 43% Mourvedre.  After first pouring a glass the oak was overwhelming, so I decided to decant it for a bit.  Ahhhhh … what a difference an hour can make.

On the nose are plum, cherry, black pepper and cinnamon.  The palate confirms the aromas with the cinnamon even more pronounced, but in a good way.  I love it!  There is also some licorice there that adds to the overall taste and finish.  After giving it the time to decant, it is a well-balanced wine with some really fun things going on and a medium-plus finish.  I’m definitely going to be checking out more wines from Calcareous Vineyard!

Do you know how it is when you are enjoying a book and you don’t want it to end???  The characters become friends with whom…

Pair a Pinot With a Fall Salad!

One of my favorite things about wine is pairing it with the right dish. Now don’t get me wrong. I’m definitely not one of those…

I love this time of year.  The change of the seasons is finally approaching.  Here in Florida the change is slight, but I relish the…