June 2nd was one fun night!  Our tasting group got together for an educational tasting of Franciacorta.  We normally do daytime tastings, but agreed upon an evening gathering for this tasting.  Who in their right mind wants to spit high quality bubbly????

In case you’re not familiar with Franciacorta, this is a wine area in the Lombardy region of Northern Italy.  The Terre di Franciacorta DOC represents the area’s fine still wines, while the Franciacorta DOCG represents the sparkling wines made in this region via the méthode traditionelle, which is the “traditional method” of the Champagne region of France.  In Italy this method is called Metodo Classico or Matedo Tradizional.

As you probably know there are many other famous sparkling wines made in Italy.  Prosecco, Brachetto d’Acqui, Lambrusco and Moscato D’Asti are just a few of the bubblies that are becoming huge sellers in the US.  These wines are usually made using the tank method, also known as Charmat, which is when the second fermentation takes place in a large tank rather than in the bottle.  This isn’t necessarily bad.  In fact, many winemakers believe that this is the preferred method for sparkling wines that are produced from aromatic grape varieties (such as Riesling and Moscato) because the yeast characteristic often found in Champagne can upstage these specific grapes.

Franciacorta sparkling wines, however, are produced byway of the second fermentation occurring in the bottle, as is done in the Champagne region in France.  In fact, Franciacorta is the only region in Italy that REQUIRES sparkling wine be made via the traditional method of the Champagne region, and they are widely regarded as Italy’s finest sparkling wine. The grapes used for Franciacorta are Chardonnay and Pinot Noir (also called Pinot Nero), with Pinot Bianco (Pinot Blanc) also allowed.  By law, the Non-Vintage wines of this region must be aged for at least 25 months after harvest, with at least 18 months in contact with the yeast in the bottle.  For Vintage Franciacorta these requirements change to 37 months for each. 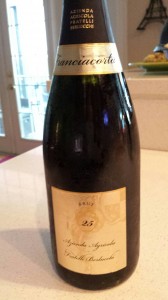 The first was the Il Mosnel Brut N/V, composed of 60% Chardonnay, 30% Pinot Blanc and 10% Pinot Noir.  This delicate Franciacorta is crisp and refreshing and was a great way to begin the night.  It has green apple and unripe pair on the nose and palate.  The mouth feel is very foaming and fun and it displays firm, small beads.  It spent 18 months sur lie and is aged another 24 months in bottle before being released.

Our second wine was a light and youthful bubbly.  The Franciacorta Brut 25 Azienda Agricola Fratelli Berlucchi is 100% Chardonnay with wonderful yeast and bread crust aromas spilling from the glass.  The color is straw yellow and has bright, fresh bubbles that tickle the palate.  The green apple and unripe pineapple kept me wanting to drink more!  Azienda Agricola Fratelli Berluchhi is owned by five brothers who are keeping their father Antonio’s wine dreams alive.  By the way, the “25” is named after the number of months it takes to get from the grape to the bottle, as mentioned above.

Next up was the 2008 Contadi Castaldi Rosè.  In Franciacorta, rosè wines must contain at least 15% Pinot Nero.  This 2008 actually has 80%, along with 20% Chardonnay.  The color is of bright copper due to the large amount of Pinot Noir.  The complex nose has strawberries and a nice floral note.  On the palate are the strawberries and some clove and the mousse is nice and creamy.  This was my favorite Franciacorta of the evening.

The final sparkling wine of the evening was the Riserva Pas Dosè Origines 2007 Lantieri de Paratico.   “Pas Dosè“ stands for “zero-dosage”.  I’ll explain!  Right before bottling a sparkling wine that is being made in the méthode traditionelle, a small amount of “dosage” is added.  Dosage is basically just a sweet wine.  How much dosage is added determines how sweet the final bubbly will be.  The initial wine (before the dosage is added) is extremely dry because all of the sugar has been converted to alcohol.  Even bubbly that ends up dry usually has dosage added to balance out the high acidity of that initial wine, and gives the final wine more body and complexity.  When no dosage whatsoever is added the sparkling wine will then be called “zero-dosage”.  Other terms are “brut nature” and “sauvage”. 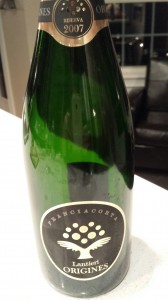 This Riserva Pas Dosè Origines 2007 Lantieri de Paratico is almost golden in color with fine and continuous bubbles streaming up the glass.  On the nose are ripe golden apple, some orange peel and a bit of spiciness.  The palate is dry, but with such a nice fruitiness and warmth that it does not have the bitter dryness of many zero-dosage sparkling wines I’ve tasted in the past.  It has a long spicy finish.

After tasting four fabulous sparkling wine from Italy’s Franciacorta region, what do you think that a group of eight sommeliers did?  We opened more wine, of course!  A fun night indeed!

The next time you’re looking for a nice bottle of sparking wine, keep Franciacorta in mind.  You won’t be disappointed!

A “WOW” Wine from Sicily

I had a beautiful wine last week. I lucked out, because a friend shared it with me after a tasting session that I didn’t even…

The warm weather is already here in Florida. Yes … already! Along with warming weather comes the dwindling days and nights remaining to enjoy sitting…

The 2012 Socré Barbaresco: An Italian Queen!

I love the Piedmont region of Italy! The beautiful landscape and lovely people are added bonuses to the glorious wines found throughout the region. My…

While in Seattle a couple of weeks ago for the Society of Wine Educators annual conference, some friends and I hit some “must dine” restaurants…