I attended a great blind tasting yesterday in West Palm Beach.  It was provided by the Guild of Sommeliers and was conducted by Geoff Kruth and Andrew McNamara, both Master Sommeliers. 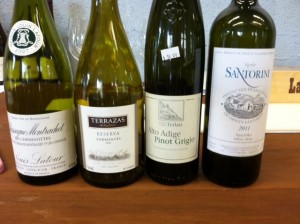 We tasted four whites and four reds.  The whites were:

2007  Chassagne-Montrachet 1er Cru “Les Chenevottes” from Domaine Louis Latour – This was my favorite white of the day, but then again I’m a sucker for White Burgundy.  On the nose was lots of caramel apple.  On the palate were green apple and some pear.  It had a lot of nice minerality, which balanced out the oak beautifully.  This Chardonnay is drinking nicely now, but can be cellared for years.  This wine is a great value at about $40.  The vineyard (Les Chenevottes) is slightly higher up on the slope and to the left of the Grand Cru Le Montrachet.

2011 Terrazas Reserva Torrontés – The very floral nose was that of a rose perfume.  On the palate were lemon, pineapple, lychee and some peach.  This unoaked wine was a classic example of a Torrontés from the Salta region of Argentina.

2011 Terlan Pinot Grigio Alto Adige– Although I found this Italian Pinot Grigio aromatically challenged, it had some nice citrus and white peach on the palate. It was nicely balanced and had a pleasant finish.

2011 Sigalas Santorini Assyrtiko – For only a little over $20 per bottle, this is another winner.  Assyrtiko (or Assyrtico) has become a top grape in Greece, as it maintains its acidity in hot climates.  It originates here in the Santorini region of Greece.  This 2011 from Sigalas had some lemon and lime on the nose.  On the palate was the citrus, along with a little green pepper, some green olive juice and a hint of smokiness.  The finish was nice and long.  This wine can be drunk now, or cellared for up to 8 years.

Next up were the red wines!

2010 Lapostolle Casa Carmenere – This is a deep purple wine with lots of red and black ripe fruits.  There is a nice spiciness on the palate and a good amount of acidity to balance everything out.  The tannins are there, but not obnoxious.  This Carmenere is from the Rapel Valley of Chile.  Carmenere is known as the “lost grape of Bordeaux” because it is rarely seen there anymore, but was planted widely in the Médoc in the early 18th century.  Today, this grape is accomplishing many great things in Chile.

2008 Muga Rioja Reserva – This wine, from a highly respected producer in Rioja, is made up of 70% Tempranillo, 20% Garnacha, 7% Mazuelo and 3% Graciano.  It spent 24 months in oak before being bottled, but the oak is not overpowering.  The plum, dark cherry and chocolate comes through nicely.  There is a vanilla cherry cola essence to this wine, and it’s delicious.  This wine will age for well over a decade.

2009 Shea Wine Cellars Estate Pinot Noir – This is a pretty big Pinot Noir, and yet it is still elegant.  On the nose there was lots of ripe cherry and vanilla.  The palate brought some strawberry and raspberry preserves, sweet cherry and baking spices.  There is a nice herbal, earthiness that keeps this wine from being “too much”.  Shea Wine Cellars of the Willamette Valley in Oregon is doing some wonderful things with Pinot Noir and Chardonnay!

2007 Tedeschi Amarone della Valpolicella – This is a concentrated, high alcohol wine.  On the nose were raisins, plums, dark chocolate and coffee.  The palate provided a mocha covered raisin taste with some other dark fruits and a touch of spice.  The tannins were present, but it’s an easy wine to drink right now.  It will, of course, develop for years to come.  I’ll be getting a few of these for my cellar!

The day ended with a surprise!  We were poured one last red wine.  We all assessed this additional wine as we heard some reviews.  We could tell it was a high quality wine.  It was well balanced with some nice complexity.  The fruit and earthiness blended well on the palate.  It ended up being a 2007 Cabernet Sauvignon from Oregon!  It’s not just anyone’s wine either; it’s a new venture by former NFL Wide Receiver and current ESPN NFL analyst Keyshawn Johnson.

The name of the wine is XIX.  Appropriate, because he wore #19 when he played!  The grapes used are 100% Cabernet Sauvignon and are from the Echo West Vineyards located at the southern end of the Columbia Valley.   The wine was aged in Hungarian Oak for 18 months.  The winemakers and owners of Echo West Vineyards are Lloyd and Lois Piercy, both natives of the American west.

If you follow my blog, you know that I love to travel! And when I travel, it’s usually to a wine region somewhere in the…

I love this time of year.  The change of the seasons is finally approaching.  Here in Florida the change is slight, but I relish the…

My July Wine of the Month

When one thinks of Las Vegas it’s rarely of wine. I personally think of the jubilant sounds of slot machines paying lucky winners, or of…