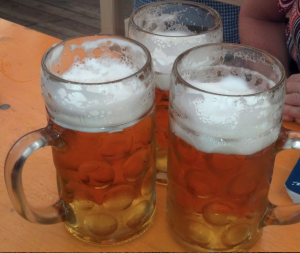 It’s that time of the year!  Oktoberfest celebrations are happening all over the U.S. and the world.  Of course, the most famous of all beer celebrations occurs in Munich, Germany.  Every year more than 6 million people from all over the world attend this Bavarian fair.

Second only to Oktoberfest is Gäubodenvolksfest, a beer and folk festival held every year in the Bavarian city of Straubing, located about an hour and a half northeast of Munich.  The locals and critics alike claim this festival to be more authentically Bavarian and much friendlier than the famous Oktoberfest.  Much of the reasoning behind this is that the festival in Straubing is full of locals, not the hordes of tourists from around the world who descend on Munich each year.  And that’s exactly what my husband and I, along with a friend, discovered while visiting Germany this summer. 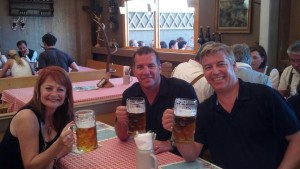 Maximilian I Joseph, the King of Bavaria, founded Gäubodenvolksfest in 1812 as an agricultural festival.  Today it is held every year in mid-August and lasts 11 days. The festival has upheld it’s traditional character beautifully.  Only beers from Straubing and the district Straubing-Bogen are allowed to be served.  Several huge beer tents are packed to the brim with people wearing the traditional Bavarian garb.  Men and boys wear Lederhosen, the leather trousers with suspenders.  The women and girls are seen in the Dirndl dresses, with the wide, long skirts and a corsage, along with a puffy white blouse and a colorful apron.  We were thankful that there are some locals who attend in contemporary apparel, as we had no Lederhosen or Dirndl for ourselves!

There are six different tents, each sponsored by a different beer, which is served in that respective tent.  We started early in the afternoon, grabbing a beer and some food.  I had a big, traditional Bavarian pretzel, and my fellow travelers enjoyed their bratwurst and sauerkraut.  Here we enjoyed a very traditional Polka band.  It was early in the day, but people were drinking and dancing and having the time of their lives.  The servers were carrying huge amounts of food on long trays, or a fistful of gargantuan mugs of beer! 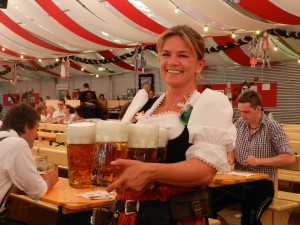 We kept moving from tent to tent, drinking the beer, toasting our fellow partiers, and listening to great bands.  They even had an all girl polka band called Hexen!  My husband and our friend especially enjoyed them!

As the beer flowed, our fellow partiers were delightfully friendly to us and included us in on the fun as we stood on our benches and exclaimed “Prost” as we clinked our humongous one liter glass steins with theirs and looked them in the eyes, as is custom in these parts!

Of course, I had to try one of the offered wines.  Well, I should say that I had to try the one offered wine!  It was a 2010 Müller-Thurgau from Franken.  This wine region is at the edge of northern Bavaria and is not known for elegant and complex wines, as are other parts of Germany.  The weather is habitually severe and this region often suffers from spring frosts.  The amount of fruit is frequently very limited from year to year.  Their wine is well loved by the Bavarians, though, and little gets to the United States.

One thing that Franken DOES have that no other wine region has is the bocksbeutel.  This is the squat, plump vessel in which Franken wine is bottled.  Literally translated, “bocksbeutel” is a goat scrotum!

I finished my wine and went back to beer!  We drank.  We clinked and shouted Prost!  We danced with new friends!  And then we walked back to our hotel!

If you’d like to visit the “real deal” Bavarian fair and beer festival next year, check them out at: http://www.ausstellungsgmbh.de/?lang=de&site_id=229

And remember; book your room early so you won’t need to drive!

I attended a great blind tasting yesterday in West Palm Beach.  It was provided by the Guild of Sommeliers and was conducted by Geoff Kruth…

Caldwell Winery and Vineyard in Napa

I’ve visited a lot of wine tasting rooms in my days, but the most unique experience may very well have been at Caldwell Winery in…

November always reminds me of Pinot Noir.  I’m not sure exactly why, but I have a feeling that there are a couple of reasons.  One…

One of my favorite things about the Sierra Foothills AVA in California is its quaintness.  It reminds me of what Napa must have been like…

If you read my blog on a regular basis you’ll know that I’m a sucker for the Rhone varietals.  The Rhone Valley in France is…