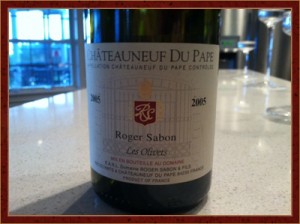 Yesterday was Bastille Day, the French National Day known as Fête Nationale in France.  To celebrate, I opened a bottle of Domaine Roger Sabon from Châteauneuf-du-Pape in the Southern Rhone Valley.

The Sabon family has been in Châteauneuf-du-Pape for a very long time.  The descendants of the family have been making wine in this region since at least 1560, and Roger Sabon began estate bottling with the 1921 vintage.  This is truly a family operation, with Roger’s sons, grandsons and granddaughters and step-grandson being the heart of the operation today.  The domaine uses the best traditional techniques along with modern technology to produce some wonderful wines.

The Wine – The 2005 Les Olivets has baked red berry fruit, sandalwood and some heat on the nose.  The heat does not show up on the palate, which does have ripe bing cherry, plum, earth and spices.  This nicely balanced wine is peaking right now and drinking beautifully.

Visiting the Winery – Domaine Roger Sabon is located right in the town of Châteauneuf-du-Pape.   The modern tasting room is located at the winery and is very inviting.  The gal who was pouring for us was very friendly and knowledgeable, but did not speak English.  I was thankful to know enough French to get us by with no problems whatsoever!  They have a very nice small store in the tasting room, where one can purchase T-Shirts and other souvenirs, wine accessories, and of course bottles of their wines.

The Journey – Châteauneuf-du-Pape is a lovely village in the Southern Rhone Valley of France.  Domaine Roger Sabon has a driveway right off of one of the main drags, making it very easy to find.  It is a short distance from the village’s main area where we stayed.  You can find out more about them at:

My April Wine of the Month

My March Wine of the Month

Dutcher Crossing Cabernet Sauvignon Cooney Vineyard Alexander Valley 2010 The Winery – Owner Debra Mathy and I have something in common; we’re both originally from…

My February Wine of the Month

My October Wine of the Month

My September Wine of the Month

My November Wine of the Month

Wrath Pinot Noir Swan/828 Monterey 2010 Pinot Noir is a great pairing with Thanksgiving dinner, so I though it would be an appropriate varietal for…