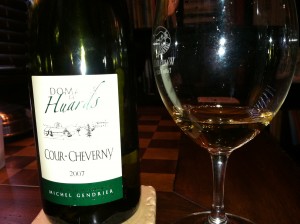 My husband and I opened a very interesting wine last night, a 2007 Domaine des Huards Cour-Cheverny.  We purchased this bottle at a Loire Valley wine tasting at Tim’s Wine Market in Orlando a couple of years ago.

I thought that this would be a fun wine to feature on my blog because it is made of the very rare Romorantin grape.  This white grape has grown in the Loire Valley since the 16th century.  It makes wine that is crisp and minerally, with good acidity.  DNA profiling has determined it to be the offspring of the varietals Pinot Meunier and Gouais Blanc.

The 2007 Domaine des Huards Cour-Cheverny is deep golden in color.  On the nose we smelled pear, mango, citrus (including lemon and a hint of orange) and some almond.  The palate provided great acidity and minerality, along with the pear, lemon, green apple and a touch of mushroom.

The odds of you having a bottle of this in your cellar are slim, but if you do, drink it up!  It’s not going to last much longer.

If you read my blog on a regular basis you’ll know that I’m a sucker for the Rhone varietals.  The Rhone Valley in France is…

Being a member of the Society of Wine Educators definitely has its benefits.  One of the perks is getting invited to some very fun wine…

To celebrate the 12th day of Christmas, and the NFL Playoffs, I opened a great Right Bank Bordeaux blend from California last night.  The 2009…

I’m a huge lover of Syrah!  While the Rhone Valley of France is where this varietal first emerged, it is now well known in New…

Caldwell Winery and Vineyard in Napa

I’ve visited a lot of wine tasting rooms in my days, but the most unique experience may very well have been at Caldwell Winery in…