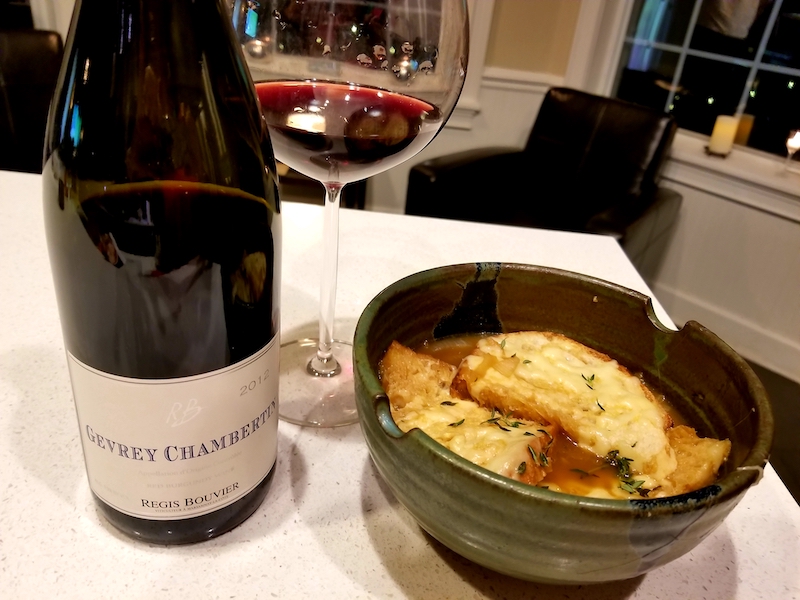 Did you know that French Onion Soup is a hangover cure? What??? That’s what a lot of people believe. In fact, this heavenly caramelized onion concoction is often served at weddings in France long AFTER the cake … to ward off the dreaded headache and nausea that is bound to plague you the next day!

I made a batch last night. Not because I was hung-over, but because it’s my hubby’s favorite! 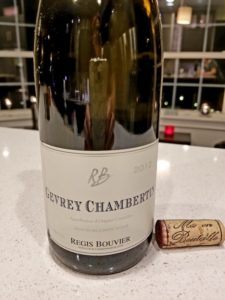 Now I know that there are a lot of wine pairing options for this tasty soup, but which bottle should I crack open? Should I go with a Pinot Gris from Alsace, whose Meyer lemon and waxy texture would compliment the soup nicely? A Gewürztraminer crossed my mind, for the touch of residual sugar that would bring out the sweetness of the onions. A Northern Rhone or Beaujolais were also tempting, but I ended up going with a Pinot Noir from Burgundy!

I chose the 2012 Régis Bouvier Gevrey-Chambertin, which I think was a great fit! The bright raspberry, cranberry and cherry fruit in the wine pick up the onion’s sweetness. The herbaceous thyme I used to in the soup brought out the earthiness of the wine. Perhaps most importantly, the great acidity of the wine cuts the richness of the Gruyere cheese (my favorite part!) blanketing the soup! 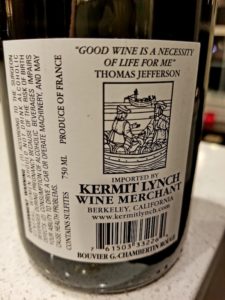 The wine itself is lovely! Perfectly balanced with fruit and earthiness, this 2012 Régis Bouvier Gevrey-Chambertin is a great value and once again a fine example of why I trust a bottle with the Kermit Lynch logo on the back label!

So go for it!!! Whether you’ve had too much fun the night before (i.e. hangover!) or you’re just in the mood for some warming soup with a kick-ass wine, cook up some French Onion Soup and grab a bottle of Régis Bouvier! Cheers!

Have you ever tasted wine in a hippie shack? Well, last weekend my husband and I did just that! While visiting the fabulous Santa Barbara…

What goes great with football???? Well wine OF COURSE!!!!!!!!!!!! Some wines even more than others. The NFL Pro Bowl has been in Orlando the past…

I live in Florida where the winters are glorious and the summers suck. It’s just so dang hot. So a couple of years ago my…

My husband and I just returned home from a magical vacation in Alsace. Our goal was to drink some good wine (of course!) and to…

Falling In Love With The Finger Lakes!

I’d always wanted to visit the Finger Lakes. I’d been to the great state of New York many times, but never to this beautiful wine…

On The Road Again!

I love road trips! I especially enjoy road trips that include a fun new beverage experience. Now we all know that Florida isn’t known for…