I first heard of Alpha Omega Winery from a fellow taster at Caymus Vineyards.  She suggested I try them, and I’m sure glad that I did! 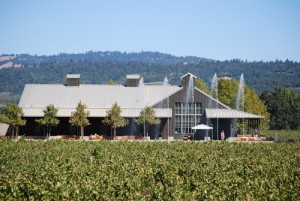 Robin Baggett and Eric Sklar, both of whom have been in the grape growing and winery business for years, started Alpha Omega Winery.  Their goal was to bring the Old World of winemaking and the New World of winemaking together.  Alpha and Omega – The Beginning and The End.  Alpha Omega is utilizing the best techniques of each, from start to finish, to hand craft elegant, world-class wines!

Alpha Omega wines are unfiltered and un-fined and are fermented naturally in barrels.  They are balanced in part by using grapes from around Napa to represent different appellations’ specific terriors.

The winemaker is Jean Hoefliger, who has made wine at Chateau Lynch-Bages and Newton Vineyard.  Working with him is Michel Rolland, the world-renowned wine consultant from Bordeaux.

The winery itself is gorgeous, with beautiful outdoor seating for tastings and picnics as well.

I’ve visited Alpha Omega a few times now, and last month I was blown away at the tasting my party and I had.  Steve walked us through their wines.  He has helped us out a couple of times before, and it’s always nice to see a familiar face, especially his!

Here are the wines we tasted:

2010 Sauvignon Blanc – This is a nice Napa Valley Sauv Blanc, with a lot of melon and tropical fruit, along with some nice mineralogy to balance it off.  This isn’t a New Zealand style Sauvignon Blanc, nor is it a Bordeaux style.  I would say it’s a combination of them both.

2009 Napa Valley Chardonnay – This is not a wine for the fan of un-oaked chards (although Alpha Omega also makes an Un-Oaked Chardonnay that has already sold out for the year)!  I enjoy both styles, and this was a beautiful oaked Chardonnay.  The nose produces hints of vanilla and lots of tropical fruit.  On the palate is pineapple for days, along with some nice acidity to keep it quaffable.  The long finish produces crème brulee and caramel popcorn.  This is my husband’s favorite Chardonnay in Napa, so we of course had to get a case.

2009 Napa Valley Cabernet Sauvignon – The Cab Sauv has big bold fruit along with some licorice both on the nose and palate.  This wine is approachable now, but can also be cellared for quite a few years.  It is 75% Cabernet Sauvignon, 10% Merlot, 7% Cabernet Franc and 8% Petit Verdot.

After tasting this Cab, Steve poured us each two more wines.  He asked us to guess what they were.  The first wine was huge.  Big and bold with lots of tannins, I guessed it was a Cabernet Sauvignon.  The second wine was soft and smooth.  I guessed that this was a Right Bank Bordeaux blend that, of course, is Merlot dominant.  Steve then proceeded to tell us that they are BOTH the 2009 Napa Valley Cabernet Sauvignon.  What?????  The first wine he poured was a bottle that he had just opened.  The second bottle had been opened the day before!  What a difference some time makes.  They both had lovely black currant and black cherry on the palate.  I look forward to enjoying my bottle, but will definitely give it at least a couple of hours in the decanter before drinking.

2009 Proprietary Red Napa Valley – The blend of this wine is 37% Merlot, 34% Cabernet Sauvignon, 16% Cabernet Franc and 13% Petit Verdot.  On the nose was some white pepper and tobacco, along with plum and cherry.  On the palate was the cherry, along with some chocolate and a little bit of saltiness!  This is another wine that will evolve well in the upcoming years. 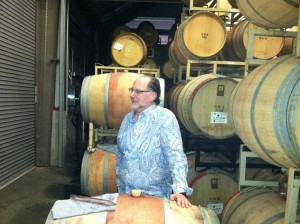 Steve then offered us a very special treat; to visit the barrel room.  There we had the amazing opportunity to taste some of their most prized wines from barrel.  We tasted the 2010 vintage of the Stagecoach Vineyard, George III, To Kalon North and the To Kalon South.  What a way to end the tasting.  All of them were absolutely lovely.  I sure do look forward to tasting them out of the bottle in about 10 years!

The next time you’re in Napa, be sure to check out Alpha Omega.  They are located right on Highway 21 in Rutherford!

I’ve visited Napa and Sonoma many, many times.  Frog’s Leap has been on my list since my first visit, but I STILL hadn’t gotten there.  This time I was determined! 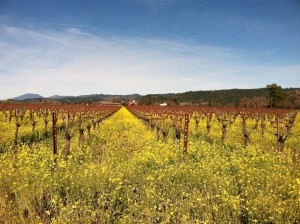 As we arrived for our tasting, we drove along beautiful vineyards of dormant vines surrounded by the beautiful mustard known in this region.  There aren’t many better welcomes than seeing the historic Red Barn, which was originally built as the Adamson winery back in 1884.  Today, this “ghost winery” not only inspires their wine tasting guests, but also Frog’s Leap’s winemakers John Williams and Paula Moschetti.

John Williams (a former dairy farmer from upstate New York) moved to Northern California in 1975 to study Enology and Viticulture at UC Davis.  After working at Glenora Wine Cellars in the Finger Lakes and Stag’s Leap Wine Cellars and Spring Mountain Vineyards in Napa, he began Frog’s Leap Winery in 1981.  It is located along Mill Creek in a spot known as the Frog Farm.  Frogs were raised here around the turn of the century, providing the very appropriate name Frog’s Leap! 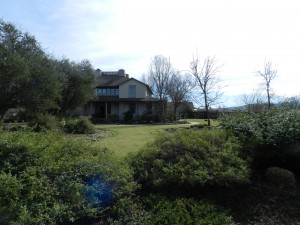 Upon entering The Vineyard House, we were escorted outside to a beautiful wrap-around porch nestled among 40 acres of organically farmed vineyard.  What a lovely area in which to taste.  We were brought a carafe of water, along with a wonderful cheese plate to accompany the wine tasting.

Here are some of the wines we tasted:

2010 Sauvignon Blanc Rutherford – This had some nice, ripe, tropical fruit flavors, and a little grapefruit acidity, which balanced out the wine nicely.  For a mere $18 per bottle, I grabbed a couple of these to take home for the golf course!

2009 Napa Valley Zinfandel – Nice, easy drinking Zin with some cherry and boysenberry and not overdone with the oak.

2009 Rutherford Merlot – The majority of the fruit for this wine comes from the vineyard in which we were sitting.  Merlot loves the rich, clay loam soils here.  The wine has some nice rich cherry flavors along with thyme and other herbs.  We bought a bottle of this as well.

2009 Napa Valley Cabernet Sauvignon – Lots of dark red fruit and some nice acidity made this a nice pick-up for the price of $42.

2008 “Rutherford” Cabernet Sauvignon – This was a very nice wine with cassis and current and a lot of nice terroir showing through.  This will be a beauty in years to come.

The thing that probably impresses me the most about Frog’s Leap Winery is that they truly care about our planet. Frog’s Leap produces some wonderful wines, while keeping the planet healthy through the production of solar and geothermal power.  In 2005 they built their Vineyard House according to the goals of the U.S. Green Building Council.  They even insulated it using old blue jeans.

Health of the vineyard is achieved through organic farming and the use of biodynamic methods. Along the rows of vines are borders of specially selected plants, which attract butterflies and beneficial insects. They are even wisely conscious of the winery and vineyard staff, numbering 45.  All of their employees are full time with full benefits.

I can tell that this must be a fun place to work too!  Their website is absolutely adorable, with a fun fly catching game to start things off.  Once inside their site, they very cleverly take you through any aspect of their winery in which one might be curious.  And what is their motto????  “Time’s fun when you’re having flies”!

Bird watching while we were tasting!