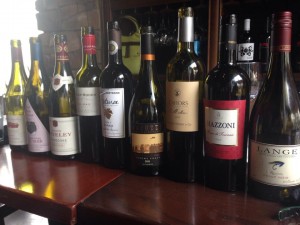 I’m a faithful (and thankful) member of a tasting group!  Every other week I get together with a handful of fellow wine geeks and we blind taste wines.  Most of us are studying for the next level of a certification, while others are well educated wine lovers who want to expand their palates.

Sometimes our group has a theme (we all bring a Chardonnay or an Italian wine) and sometimes we just wing it! This past gathering we all brought a red.  That was the only stipulation.

We tasted through a bunch of lovely wines, but a few stuck out to me.  One was a wine from the Cahors AOC (now AOP) in France.

Argentinean Malbec is one of the “in” wines right now.  They can be a great alternative to a Merlot, or a great wine to order with a steak at a nice restaurant when you don’t have the budget for a big time Napa Valley Cabernet Sauvignon.  Argentina does, however, need to thank Bordeaux and especially Cahors for this fabulous varietal.

Cahors is located in the Quercy district in South West France, 100 miles east of Bordeaux.  It is the only appellation producing exclusively red wines that use neither Cabernet Sauvignon nor Cabernet Franc.  The wines of Cahors are allowed to use up to 30% of the tannic Tannat grape and the supple Merlot grape combined, but must contain a minimum of 70% Malbec.  Many of the wines here are 100% Malbec.  It is known as the “black wine” due to its deep intensity of color.

The Cahors I tasted with my tasting group this week was the 2011 Lionel Osmin & Cie.  This deep purple colored wine has blackberry, plum, and cinnamon on the nose.  In fact, we decided that it wasn’t just cinnamon, but Big Red chewing gum!!!  A fellow taster also suggested smelling wet saddle, which I agreed with completely.  This fruit driven wine is of medium to medium-plus intensity and has black currant, black cherry and a bit of licorice on the palate.  Although there is a lot of fruit here, there is a lovely earthiness and some serious tannin, giving it some backbone.

Cahors is a noble and ancient red wine.  In fact, this wine region is older than even Bordeaux, and is a hidden and affordable gem in the French wine world!

I strongly suggest that you seek out wines from Cahors!