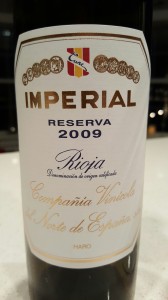 While planning an upcoming trip to Spain, I decided to crack open a bottle from one of the regions I’ll be visiting … Rioja!

The bottle I selected is the 2009 C.V.N.E. (Compañía Vinícola del Norte de España) Rioja Imperial Reserva. Founded in the year 1879 in the town of Haro, Rioja by two brothers, CVNE is still controlled today by the direct descendants of the founding family.  The “Imperial” product operates as a winery within a winery, and was given its name because it was originally exported to the United Kingdom in imperial pint sized bottles. This is a very well respected wine from Rioja; the 2004 vintage was named the #1 wine of the year in 2013’s Wine Spectator Top 100. 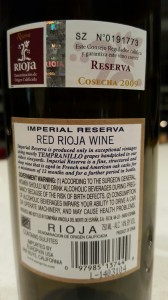 This 2009 is a blend of 85% Tempranillo, 10% Graciano and 5% Manzuelo. Decanted for about an hour before pouring, on the nose is dark cherry, chocolate, tobacco, some licorice and a lavender note. On the medium bodied palate are stewed fruits, especially currant and plum, some spice and well-balanced tannins.

One of the many things I love about the wines of Rioja is that they aren’t released too early. The Reserva level wines require at least one year of aging in oak (both American and French) and two years in the bottle before being released. This ’09 was actually aged for 2 years in oak and 2 years in the bottle. Therefore, although this is still a young wine and will get even better with a few more years in the bottle, it is drinking very well right now.

Am I excited about visiting Rioja? I sure am! I’m also excited to do some more homework on this region and the others I’ll be visiting. See … homework CAN be fun! 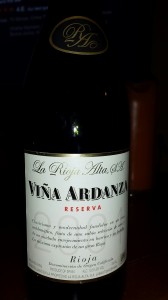 I don’t have many Spanish wines in my cellar, but that’s about to change.

The other night my husband and I opened a 2004 La Rioja Alta Reserva Vina Ardanza, and I fell in love.  Rioja is located in north-central Spain, closer to Bordeaux than the Mediterranean Sea.  This wine is from Rioja Alta, one of Rioja’s sub regions, which has warm, sunny summers, mild winters and a high altitude.

The expressive nose is earthy with cedar, tobacco and dark fruit.  The palate has dusty earth, coffee and a lot of black cherry and other dark fruit flavors coming through, but not in a jammy way.  The earth and fruit are a wonderful marriage in this dark red wine.  It’s drinking well now, but has plenty of time to go too!

The 2004 La Rioja Alta Reserva Vina Ardanza is a great deal for the $30 price point.  It can be found for even a little less!  You really should grab some if you can find it!  I’ll definitely be buying more, and increasing my personal supply of wines from Rioja and other parts of Spain as well!