Châteauneuf-du-Pape!  What can I say?  This tiny village produces some of my favorite wines in the world.  A beautiful wine region, this is one of the most famous appellations in France and is thought to be one of the first regions in this world famous wine country to produce wine. 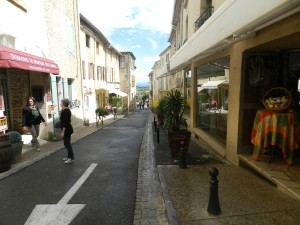 Châteauneuf-du-Pape itself is a charming town with lovely restaurants and great bed and breakfasts and hotels. My husband and I visited during a few very cool days in late May, but the warmth of the people in the area made it all okay.  We stayed for three nights at the “Maria & Andreas” Bed & Breakfast, a very homey and welcoming place to lay our heads after a full day of tasting and fun.  The hosts were very kind and supplied us with much information regarding restaurants and wineries to visit. 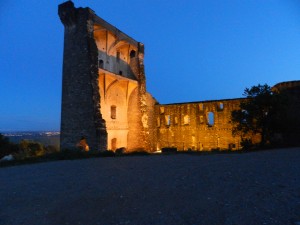 If the wines of this village weren’t so stellar (but they are!!!), the main attraction would undoubtedly be the ruins of the castle.  In 1308 Pope Clement V relocated the papacy to the city of Avignon, France.  Being great lovers of wine, he and subsequent popes from Avignon did a lot to promote wine and winemaking in the region of Châteauneuf-du-Pape, just 11 kilometers away.  John XXII, who built the famous castle, which was completed in 1333, succeeded Clement V.  This “New Castel of the Pope” was known as the papal summer residence.  Some claim the castle served mainly in a defensive function, but one source told me that it was a weekend get-away spot and rumored to house lady friends. 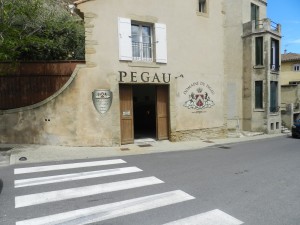 We had the opportunity to visit several wineries, from famous producers such as Roger Sabon and Chateau de Beaucastel to less well-known wineries like Domaine de la Ronciere and many in between.  Located right in town there also is the “Vinadea – Maison des vins de Châteauneuf-du-Pape” selling 200 varieties of Châteauneuf du Pape wines (representing 90 producers) at cellar door prices. 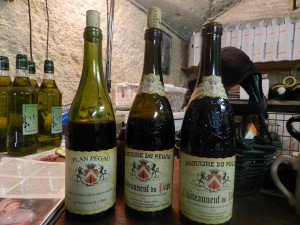 Here are a couple of my favorite visits:

Domaine du Pégau – Wonderful wines made this a great tasting, but our host Jacques made this one of the most memorable tastings of my life!  Domaine du Pégau is a family owned winery.  The Feraud family has been producing wine in the Châteauneuf-du-Pape region since 1670.  The holdings have grown slowly and in 1987 they incorporated as a partnership between father and daughter, Paul and Laurence. 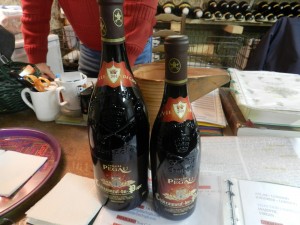 The tasting room is a wonderful old cave full of bottles and crates of their lovely wines.  We didn’t taste a dud, ranging from their Plan Pégau (a steal at only 7 Euro) to their 2010 Cuvee da Capo, which has received scores of 98 – 100 points! 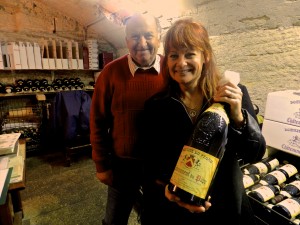 Jacques was WONDERFUL!  He was very knowledgeable as well as a hoot and a half!  He had my husband and me in stitches while enjoying the wines.  If it had been easier to get home, we would have bought cases!  Luckily many of these wines are distributed and can be found in the states.

We spent our last night in Châteauneuf-du-Pape at the Chateau des Fines Roches, a lovely castle with beautifully decorated rooms and lovely outdoor areas to have a picnic and a bottle of Châteauneuf-du-Pape wine!  Right next door is Château la Nerthe!  This winery was on my list of must visits, so we stopped on our way out of town. 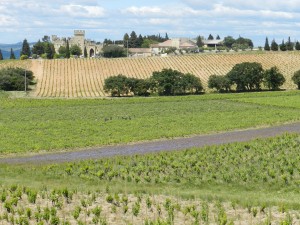 Château la Nerthe – This is a winery that has beautiful wines and a gorgeous setting.  Its treasured vineyards surround this elegant castle, built in 1760.  Château La Nerthe itself was started in the 12th century, around the same time that vines were planted in the area.  The château itself houses an immaculate winemaking cellar producing wines that have the toughness typical of Châteauneuf-du-Pape rouge wines, but also a very pleasant elegance. 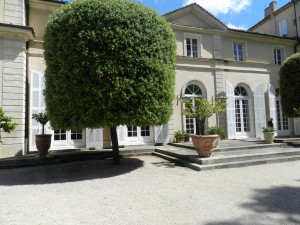 We were there early in the morning and shared the tasting with only one other couple.  I’ve heard that it can get pretty busy here, so we picked a good time.  The wines were predictably great.  We tasted both red and white from many vintages.  We sampled their lovely 2005 vintages, which was a treat.  They even had some library wines available for purchase, so we bought a 1988 to drink later during the trip.  It was wonderful! 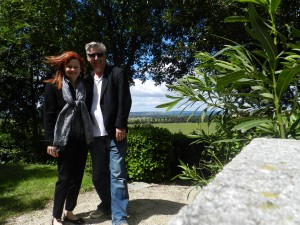 This was the first day of many in which we were “lucky” enough to experience “Le Mistral”!  Le Mistral is the savage, cold wind that blows down from the Alps and through the Rhone Valley, gathering speed and ferocity as it goes.  I mention this because I’m including a photo of us in front of Château La Nerthe’s vineyards.  You’ll see the effects of Day 1 of Le Mistral.  It only gets better …

2007 Sprecher Barley Wine (A Beer For Your Wine Cellar!)

I’m obviously a huge wine lover, but I’m a beer lover too! I’ve been all over the world tasting wine, but I also drink a…

Last week my husband and I headed to Epcot’s International Food and Wine Festival to check out some wine and have some fun.  We attend…

On my recent European excursion the first stop in Italy was the magical city of Venice.  In a city full of fine dining and extensive…

We were heading from Venice to Verona, so visiting Soave was a MUST for me.  After finding the center of town (where a wonderful Italian…