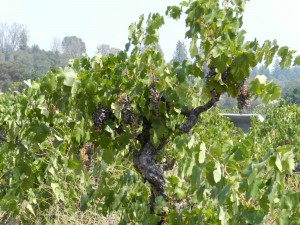 Of all of the California wine regions I’ve visited, there was one AVA in that great state yet for me to explore.  I crossed that off my list last month.

The Sierra Foothills AVA is located about two hours northeast of San Francisco and 45 minutes east of Sacramento.  One of the largest AVAs in the state of California, the Sierra Foothills AVA contains portions of eight California counties including Amador, Calaveras, El Dorado, Mariposa, Nevada, Place, Tuolumne and Yuba.  We focused on Amador and El Dorado, so that’s what I’ll focus on here as well.

Grapes have been growing and wines have been being made in this region since the California Gold Rush in the mid 19th Century.  A lot of the folks who set out to make their fortunes in gold were of European decent, and brought their love of wine and skills of winemaking with them.  They planted grapes, but when the gold was gone and the gold mines closed, the wine industry pretty much collapsed.  A revival began in the 1970s, and in 1987 the Sierra Foothills region was recognized as an official American Viticultural Area (AVA).

While visiting the region last month we visited 11 different wineries.   Most were pretty good, some were excellent and one … ?  Well, let’s just say that it was very interesting and educational.  I’ll talk more about that in my next blog.

Here are the wineries we visited on Day One:

Story – This winery has a cute little cabin that is used as its tasting room.  Story is located high up in the foothills with a nice little picnic area next to some ancient Mission grape and Zinfandel vines and overlooking the Sierras.  The wines were good too, especially their 2010 Quartz Zinfandel.

Turley Wine Cellars – Just over a year ago Turley bought well-known Zinfandel producer Karly Wines.  This gave Napa based Turley, long respected for their winemaking, a presence in Amador County.  Turley had been buying grapes in this area since 1996.  They’ve renovated the Karly tasting room and are slowly weaning off the Karly label.  It is very exciting for the Sierra Foothills AVA to have such a well-known producer in their region.  Allison in the tasting room did a great job walking us through their many wines. I especially enjoyed the 2011 Turley Judge Bell Zinfandel.  This was a wonderful representative of the zinfandel grape.  It’s not over-done.  Instead it’s a medium-bodied delightful wine with a long finish. 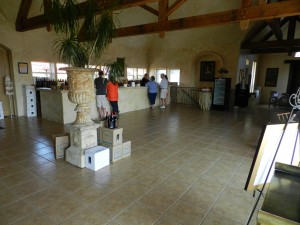 Karmère Vineyards and Winery – This winery is located in the Shenandoah Valley and has a beautiful French-style chateau tasting room with lovely picnic areas outside.  We were fortunate to have Hayley, one of the winery owner family members, guide us through the wines.  She was VERY knowledgeable and a wonderful gal.  All of their still wines are estate grown with the exception of their Sauvignon Blanc and their Barbera.  My favorites included the 2009 Morgan Nebbiolo and the 2010 Hayley (named for the gal pouring!) Zinfandel.

Terra d’Oro – The magic at Terra d’Oro was the tasting room manager Steve!  His knowledge and likeable personality made for a very fun tasting; and the wines weren’t half bad either!  This winery also pours the Montevina labels, their more affordable California appellation bottlings.  Their Zins are big and jammy.  Our favorites were probably their Port style wines, one made with very old vines.  They also have some fun, lesser known Italian varietal wines.  One is Teroldego, a grape grown primarily in the northeastern region of Trentino-Alto Adige.  Another is Aglianico, grown in the Basilicata and Campania regions of Italy. 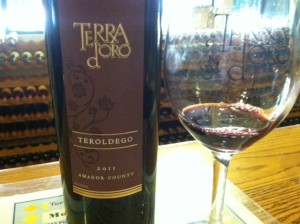 It was a very fun day of tasting, and it was only the beginning!  We had two more days of exploring this rustic and unpretentious wine region ahead of us!  And explore we did.  Next up:  Day Two  Some gems and some duds!

Walk the County Line, And Taste Some Fine Wine!

Pride Mountain has been one of my favorite Napa wineries for years now. Well actually, they’re not JUST a Napa winery! The Napa/Sonoma county line…

Being a member of the Society of Wine Educators definitely has its benefits.  One of the perks is getting invited to some very fun wine…

What Vintage Are YOU Celebrating?

A fun way for a wine lover to celebrate an anniversary of any kind is to crack open a bottle from that specific year. My husband…