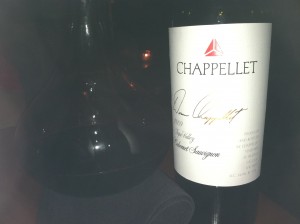 With dinner last night I had the 2009 Chappellet Signature Cabernet Sauvignon.  It’s still a baby, but with some decanting it is very approachable now.  And what a nice wine it is!

This Bordeaux blend is 76% Cabernet Sauvignon (just past the required amount of 75% to be called a Cabernet Sauvignon in California!), 11% Malbec, 9% Merlot and 4% Petit Verdot.  The grapes are grown in the dry, rocky soils of Pritchard Hill in Napa Valley.

The nose produced a wonderful floral aroma, specifically violet, along with some currant, black cherry and plum.  On the palate were the currant and plum, along with blackberry, cassis and some cinnamon and ginger.

This is a complex wine that is nicely balanced with just a touch of oak.

What a great bottle with which to start the long weekend!