Ah … music and wine. They go together almost as well as food and wine. There’s nothing more relaxing after a tough day than to pour a nice glass of wine, sit back and put on some of your favorite music. 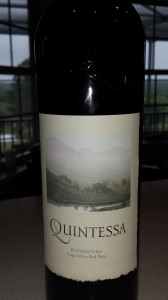 There are many parallels between music and wine. A song, like a glass of wine, will have a different effect on you depending on when you’re experiencing it. A bottle of wine will, of course, taste differently from one day of opening it to the next, but it’s more than just that. With whom are you enjoying this specific bottle or song? Are you picking the music and/or wine due to a special occasion? Are you stressed out and needing to relax, or are you happy and just want to have some fun???

Last week my husband and I were invited by some friends to join them in their Loge seats at the Amway Arena in Orlando for the performance of Fleetwood Mac’s “On With The Show” tour.

To repay them we wanted to treat them to some nice wines, so we had them stop over before leaving for the concert where we had a decanting 2007 Quintessa waiting. After having a quick glass of sparkling wine (it’s very difficult for me to start a fun evening without some bubbly!) we poured the fabulous Napa Left Bank Bordeaux blend from Rutherford.  Silky and elegant, the ’07 Quintessa has lots of mocha and black cherry on the nose, with cola, baking spices and dark fruit on the palate.  It’s drinking beautifully right now after being decanted, and I expect that it will last another 10 or more years. 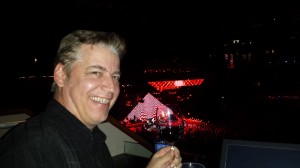 After enjoying the wine, we headed to the arena. We are used to seeing concerts from the floor, while juggling our plastic glass of often less than adequate wine while jumping up and down and swooning to the music. Heck, I saw Fleetwood Mac’s Tusk Tour back on May 11th of 1980 (yes I know, I’m aging myself) undoubtedly drinking a Miller Light. Hmm. Come to think of it, I wasn’t of age yet, so I probably was drinking a Diet Coke! The beauty of the Loge seats is that we had a server who brought us a menu and a wine list. Yes … an actual wine list! 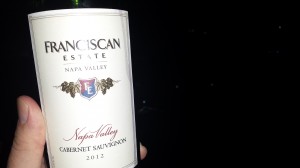 We picked the 2012 Franciscan Estate Cabernet Sauvignon from Napa Valley.  Okay, we were definitely paying restaurant prices, but what fun it was to have a nice glass of wine (in an actual wine glass), along with some food, AND to have a table in front of us on which to set it! Although not in the same league as the Quintessa, The Franciscan was really nice. Made of 85% Cabernet Sauvignon, 9% Merlot, 3% Malbec, 2% Petit Verdot and 1% Cabernet Franc, they used all of the Bordeaux varietals in this one. Big dark fruit, violets and vanilla greet you on the nose.  It has a big mouth feel with baking spices, black cherry, cassis and plum! This is definitely a nice wine for the price. 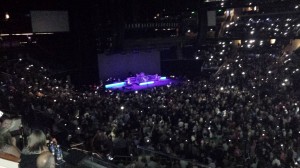 Back in 2007, when the Quintessa was being harvested, “The Essential Fleetwood Mac” (a comprehensive compilation for Fleetwood Mac’s blues recordings) was released. That year also brought Stevie Nicks giving a great interview describing her survival of the craziness of the preceding couple of decades filled with way too much fun. In another interview she stated that she didn’t want to carry on with the band if Christine wasn’t onboard.

They did, however. In 2012, when the Franciscan grapes began their fermentation, it was announced that Fleetwood Mac (sans Christine McVie) would begin a world tour in April of the next year. 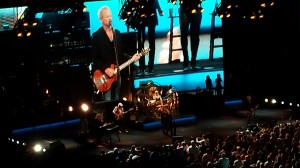 I, for one, am thankful that a few years have passed and that they are once again back together. Like a great wine, Fleetwood Mac has gotten better with time! Their voices and musical skills remind me of a beautiful bottle of Bordeaux with some age on it. The varietals are not only blended together to create a well-balanced product, but time has set in and done its magic so that the wine has reached maximum enjoyment. Stevie Nicks’ voice is still amazing, Lindsey Buckingham can still play the crap out of the guitar, Mick Fleetwood is one of the best drummers ever (as well as a hoot and a half on stage!) and John McVie is the same backbone of the band after beating cancer.  Their beautiful “Songbird” Christine McVie is finally back with them, adding magic to that final blend. 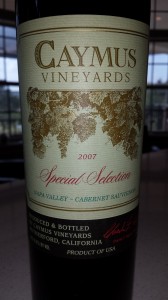 We couldn’t stop there, of course. Upon returning to our house we had one more wine waiting, a 2007 Caymus Special Selection Cabernet Sauvignon. Time has also been kind to this wine. After decanting, the wine doesn’t scream all of the vanilla oak that is present in its youth. It still has some vanilla, but is now lush with lots of well-integrated black cherry, currant, plum, licorice and tobacco.  This is another example of time doing wonderful things, and this ’07 still has lots of time left!

What a memorable night it was. We appreciated the time spent with great friends. We loved the chance to see (and hear!) an iconic band playing music from our youth. Adding the exclamation point onto the whole evening was the chance to include some fabulous wines to enjoy with it all! The wine took the night to another level, and we can’t wait to share another bottle or two with some more music and some more friends.