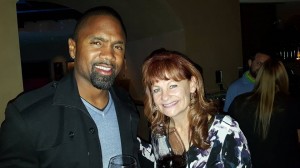 I make no secret of my love of wine AND football! My friends, family and colleagues know that I’m pretty much obsessed with both! So when I discovered that one of my favorite players of all time, who also happens to have a wine, was going to be in Orlando ON MY BIRTHDAY … well guess what happened! I went! 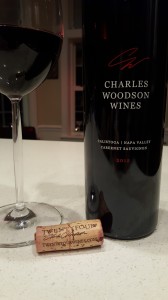 Charles Woodson is a defensive back that played for Michigan, the Oakland Raiders and my beloved Green Bay Packers. His football stats are amazing. He won a National Championship with the Michigan Wolverines as well as the 1997 Heisman. He was the 4th overall pick in the 1998 NFL Draft by the Oakland Raiders, where he won the NFL Defensive Rookie of the Year. He won the 2009 NFL Defensive Player of the year and Super Bowl XLV with the Green Bay Packers. These are just a few of this Hall of Fame lock’s gazillion awards and accomplishments during his football-playing career. 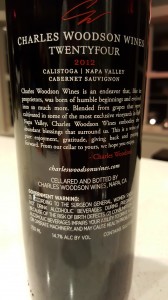 But where am I really going with this???? HIS WINE!!!!!!! And boy oh boy has Woodson scored again! Charles has had a lot of picks in his career, but this may be his best pick yet!

The 2012 TwentyFour by Charles Woodson has bright cherry and vanilla on the nose. The palate has chocolate covered cherry, ripe dark fruit, tomato, some nice earthiness and a touch of oak! This well-balanced wine has velvety tannins and ends with chocolate on the long finish.

I was truly impressed with this lovely wine. It’s not overdone like some Napa Cabs. It is approachable now, but can lie down for another ten plus years.

Charles’ wines should definitely be included on your wine “fantasy team”!!!  The wine is fabulous, and the NFL great behind it is a really nice guy. What a nice bonus!

Looking for a Great Napa Cab? Check out Piña!

I have a new favorite winery in Napa. It’s not a fancy place, but that’s okay with me! The wine’s not cheap, but it’s definitely…

Failla has got it going on!!!!!  Not only do their wines rock, but they have an adorable tasting room in which to try them! I…

Looking for a “Green” Winery With Wonderful Wines??? Check Out Frog’s Leap!

My husband and I recently returned from another adventure in Napa and Sonoma. Our goal was to visit wineries we’d never hit before, and for…

My husband is a huge lover of Caymus wines.  They do some lovely Zinfandels that are only available at the winery.  They also do a…

Looking for a GREAT Napa Syrah???

Oh boy! I opened a bottle of wine last night that I absolutely love! A few weeks ago a friend brought over a Bedrock Wine…

Are You Waiting to Arise??? Meet Blackbird Vineyard’s Arise!

I’ve always been a Right Bank kind of girl. Now don’t get me wrong, I love wines from the Left Bank as well. How the…