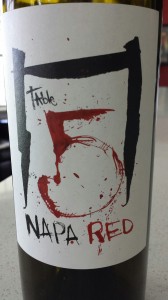 I had a really fun wine the other night that probably isn’t well known to a lot of wine lovers.  The winery that produces it, however, probably is!

Carter Cellars’ first vintage was in 1998, but Mark Carter’s wine journey began much earlier than that.  Carter House, a small bed and breakfast when it was built in the mid 1980’s in Eureka, CA, became so popular that he and his wife needed to expand the lodging and open a restaurant.    Their now well-loved Restaurant 301 was created, and Mr. Carter began compiling a wine list that today is absolutely amazing and is consistently a Wine Spectator Grand Award winner.    Along the way he met many successful winemakers and became especially friendly with legendary winemaker Nils Venge.   Now known as the “King of Cab”, Venge was Groth’s winemaker whose 1985 Cabernet Sauvignon Reserve was awarded the first perfect score of 100 points by Robert Parker for a California wine!

Together the two men formed a partnership, sourcing fruit from some of the best vineyards in Napa and beginning Carter Cellars.  It didn’t take long for Carter Cellars to get rave reviews of their own, including a 100 point score from Parker for their 2002 Beckstoffer To Kalon Cab!

Knowing that not all wine lovers can afford some of their wines, Carter wanted to offer a wine that is sourced from outstanding fruit and great vineyards, but can also be affordable to more wine lovers.  Named after Carter’s “good luck table” at Restaurant 301, Table 5 was born!  Years earlier it was at Carter House’s table 5 that he met Fred Schrader (of Schrader Cellars), who agreed to source the aspiring winery owner grapes from Schrader’s premier vineyard in Napa, which enabled Carter Cellars to make their first wine.

The 2010 Table 5 Napa Red is a Right Bank Bordeaux blend of Merlot (Carter’s favorite varietal) and Cabernet Sauvignon.  Smooth and easy drinking, this wine has lush dark fruits including blackberry and black current.  It’s not the most complex wine in their portfolio, but it is well balanced with some vanilla, baking spices and very smooth tannins.  It is a food friendly wine and went very well with the pizza I had that night.

I also love the label.  Mark Carter’s son Joseph designed the playfully appealing front and back labels, which are very eye-catching and would be difficult to not grab off of the shelf at your local wine retailer!

In the $40 range, I would buy this wine again and I definitely want to check out some more of Carter Cellar’s offerings.

Pairing Your Childhood With a Wine? Heck ‘ya!

The other night I decided to pair one of my favorite wineries in Napa with a childhood favorite recipe. I remember learning how to make…

I make no secret of my love of wine AND football! My friends, family and colleagues know that I’m pretty much obsessed with both! So…

Good wine isn’t always expensive. The chatter of fine wine needing to cost a lot of money often frustrates me. Do I love some pricey…

Are You Waiting to Arise??? Meet Blackbird Vineyard’s Arise!

I’ve always been a Right Bank kind of girl. Now don’t get me wrong, I love wines from the Left Bank as well. How the…